Stereotypes are cultural short-cuts. We all have stereotypes, some good, some bad, some ugly. At times, they become embarrassing and it’s time to pull them out from our subconscious and examine them.

I do not get excited about football often, but I surely do about stereotypes and unconscious bias. When I heard about a recent FA unfortunate tweet for the return of England Women Football team, I thought at last I can mention football in a blog post. Here is how the FA greeted the team back:

“Our #Lionesses go back to being mothers, partners and daughters today, but they have taken on another title – heroes: the-fa.com/wqavCo”

Well, I admit it will not be about football, but what a great opportunity to talk about stereotypes in more details!

Stereotypes are cultural short-cuts. We all have stereotypes, some good, some bad, some ugly. At times, they become embarrassing and it’s time to pull them out from our subconscious and examine them.

So let’s take a closer look at this tweet. The FA sounds well intentioned and truly meant this tweet as a warm greeting. Would they warmly greet the male national team back to being fathers, husbands and sons in a similar situation? Unlikely. It would feel like a joke, wouldn’t it?

Men’s families are just… their own business

Men are not defined by their family relationships. Men don’t go to dinners expecting the first question to be ‘so, what does your wife do?’ A casual tweet referring to them as fathers, partners or sons would be inconsistent with how we think of them. 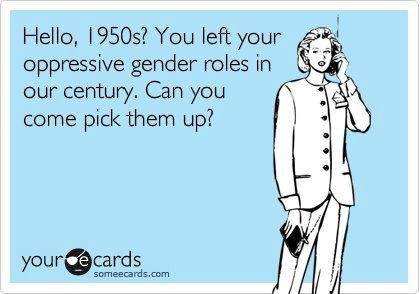 Women on the other hand are used to mentioning their partners’ jobs. Sometimes before theirs. Sometimes instead of theirs. It is annoying, but hardly surprising. And I must confess I’ve been guilty of this one. Hopefully not too badly. Gender stereotypes affect all genders alike!

Men and women are as likely to have partners, parents and children. But men’s families are just… their own business, while women are the one associated with family.

Advertisement companies are expert at utilising those shortcuts. Like archetypes, they are access point to specific emotions, concepts and meanings. It sounds harmless, family is great. But there is a problem.

The association is so strong that the other aspects of a woman’s life fall out of focus. Society is a distorting camera. Take a woman’s picture with this camera, it comes out with the family in the foreground, in crisp focus, and an artistic blur around it representing: ‘the rest ‘. Take a man with the same camera and you have a completely different picture, distorted in a different way.

One would expect the FA to present a picture of the players focused around sport, with the rest blurred. But somehow, stereotypes were too strong for them.

But we can spot and correct the distortion

But society is changing and many - women or men - feel ill at ease, or even outraged, by the tunnel vision society has of women.

Let’s assume we share the basic idea (if not, let’s agree to disagree): men and women are as likely to achieve great things in any domain, and they deserve the same credit when doing so - or any other formulation of your choice. How come we don’t turn this ship around quicker?

Because we don’t always pay attention and the biases are unconscious so it’s hard to spot. If you remember the picture analogy, it’s easier to point at the centre of the picture; it takes conscious effort to even notice the picture has been distorted.

The good news is: once you are aware of the distortion, it only takes a bit of curiosity to see what is behind. Take this tweet as an example, or any comment you think hides stereotypes: 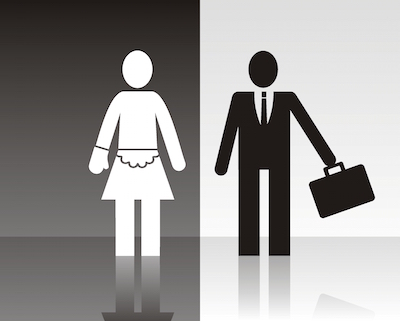 Gender stereotypes are harmful to both men and women. Men fighting for the custody of their children deserve the same fair treatment. And I am not mentioning ethnic or religious stereotypes but it goes without saying they require the same attention.

I hope the FA sat down to think about it. After all, it says more about them than about the “Lionesses”. Surely, addressing athletes as athletes could be a refreshing editorial line for them. But unconscious biases and stereotypes are strong, so before throwing the first stone, let’s keep our own stereotypes in check